This MIDI tutorial will help you to understand how you can use the MIDI language to control any device that uses the MIDI protocol.

The MIDI language is used to transmit real time information for the playback of a piece of music.

Various messages are defined to transmit the information needed to perform the playback of music.

The important point is that the MIDI language does not define the sound itself, but only the sequence of instructions to create the sound in the target synthesizer.

Except for some system MIDI messages, the STATUS byte contains theMIDI channel number. There are 16 possible MIDI channels, numbered from 0 to 15 in hexadecimal. In practice, musicians and software refer to the MIDI channels by counting them from 1 to 16, so that there is a difference of 1 when you program them in hexadecimal (channel "1" is coded "0", channel "10" is coded "9" and channel 16 is coded "F").

In the same MIDI cable, up to 16 MIDI channels may be used to control up to 16 different instruments playing independently.

The main messages are the NOTE ON and NOTE OFF messages.

The NOTE ON message is sent when the performer hits a key of the music keyboard. It contains parameters to specify the pitch of the note as well as the velocity (intensity of the note when it is hit).

When a synthesizer receives this message, it starts playing that note with the correct pitch and force level.

When the NOTE OFF message is received, the corresponding note is switched off by the synthesizer.


The NOTE ON message is structured as follows:

The pitch value determines the frequency of the note to be played. It goes from 0 to 127, with the middle C note being represented by the value of 60:

To transpose a note one octave higher, add 12 to its pitch value. By using MIDI, transposition is very simple as it is done simply by adding or subtracting a fixed value.

The velocity value normally goes from 1 to 127, covering the range from a practically inaudible note up to the maximum note level. It basically corresponds to the scale of nuances found in music notation, as follows (it is more indicative than exact values):

In basic synthesizers, the velocity value is used only to determine the force with which the note is played, the only effect being a note that is louder or softer in volume.

In more sophisticated synthesizer, this value will also affect the sound quality. Indeed, on a real piano, hitting a note harder will not only affect its loudness but also the quality of the sound itself, the timber. This is practically the case with any real instrument.

There is a special case if the velocity is set to zero. The NOTE ONmessage then has the same meaning as a NOTE OFF message, switching the note off.

The NOTE OFF message is structured as follows:

where CCCC and PPPPPPP have the same meaning as above. The VVVVVVV is the release velocity, which is very rarely used. By default, set it to zero.

When you send a NOTE ON message to a synthesizer, this note starts playing. Meanwhile, you can send other NOTE ON messages, with different note pitches, so as to hear a chord. However, you need to keep track of the notes that are playing, so that you can send a correspondingNOTE OFF for each note, otherwise there will be stuck notes playing forever.

Let's take an example. What are the MIDI messages needed to play the following measure? 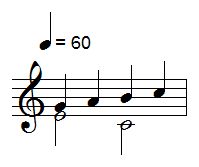 As the time dimension must be present to hear the music, here is the time sequence of the MIDI messages that you need to send to a synthesizer to have it play the above music on channel 1 (remember, coded as 0), with a velocity of 64 (mezzo forte), in hexadecimal (0x means hexadecimal notation):

"t" represents the time in seconds. The score plays at 60 beats per minute, so each quarter note is 1 second.

Up to now, there is no information to tell the synthesizer what sound must be used to play the notes. The synthesizer would probably use the piano or its default instrument.

The MIDI message used to specify the instrument is called a "program change" message. It has one STATUS byte and one DATA byte :

For instance, the trumpet instrument has number 57 in the GM list, so in the above MIDI message you must set XXXXXXX = 56 to get the correct instrument in the target synthesizer.

The notes sent to the synthesizer after that message will be played with a trumpet sound.

Drum instruments form a special case, as they do not have a specific pitch like on a piano or trumpet. A specific MIDI channel is used to transmit the playback of drum instruments. In General Midi, it is channel 10, but you will find synthesizers that can be programmed to receive drums on any channel.

In the case of a channel assigned to drum instruments (and also for special sound effects often included in synthesizers), the NOTE ON and NOTE OFF message information for the pitch is in fact used to select which drum or sound effect will play.

For General MIDI, you can find the standard list of drum instruments here (at the end of that page):

For instance, to play a bass drum instrument on channel 10, send the NOTE ON message as follows:

0x99 is the STATUS byte for the NOTE ON message, using channel 10 (coded 9). 0x23 is decimal 35 which is the note number used for the acoustic bass drum in the GM list above. 0x40 is decimal 64 for a velocity around the mezzo forte nuance. You should then send the NOTE OFF message as follows:

The MIDI protocol handles up to 16 different MIDI channels. Each channel has its own status, for instance the current instrument defined, the notes that are currently playing, as well as other values like the volume, the panoramic,...

Here is a score example with three instruments. 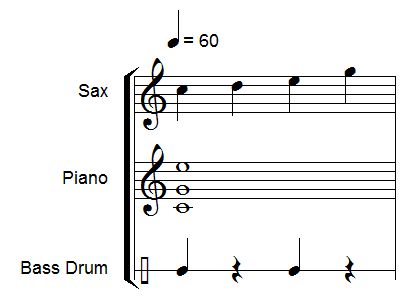 The sax, piano and bass drum will use respectively channels 1, 2 and 10. The MIDI message sequence is the following.

First send the program changes to specify the instruments to use on each channel:

For drums on General MIDI it is the program change 1 (coded 0) which is the standard drums kit. Some synthesizers also propose Jazz kits, Orchestral kits, Electronic kits,... with different drum sounds).

Then we can send the notes as already explained. Notice that here, we have used the NOTE ON message with a velocity of zero, as the equivalent of the NOTE OFF message. This is often used in practice.

There are 128 MIDI controllers defined, but only a few of them are used in practice. The purpose of a MIDI controller is to set a value of a parameter in the synthesizer playing the notes, like the volume, the panoramic (position in space from left to right in stereo), the level of reverberation,...

The message is constructed as follows:

The most common controller numbers are the following:

The volume change has an impact on all notes currently playing as well as the notes that will start playing later. The synthesizer keeps that volume level until another volume level is sent.

To create a crescendo, you need to send a sequence of increasing volume values.

You must always balance out the velocity and volume values to use, so that both are in a correct range of value. If one of them is too low, the notes may not be heard correctly even if the other value is at its maximal value. The effect of both values are multiplicative to determine the real loudness of the note.

A synthesizer may contain one or more sound banks, each containing 128 sounds. If you want to use a specific sound bank of the synthesizer, you must first activate the new bank and then send the program change message.

As an example, if you want to use sound number 3 (encoded 2) on channel 1 (coded 0) in the bank with specification LSB=1; MSB=5, you must send the following sequence of MIDI messages:

After receiving these messages, the synthesizer will play the following notes with that specific sound.

The information about the program change numbers and the sound banks available is to be found in the MIDI implementation chart and MIDI specifications of the synthesizer you are using.

The Pitch Bend message is used to vary the pitch of the notes that are playing on the current MIDI channel. The message is the following:

where CCCC is the MIDI channel, LLLLLLL is the LSB of the pitch bend value and MMMMMMM is the MSB. The 14 bit value of the pitch bend is defined so that a value of 0x2000 is the center corresponding to the normal pitch of the note (no pitch change). Using numbers above 0x2000 (up to 0x3FFF) will increase the pitch and using numbers below (down to 0x0000) will decrease the pitch. The range of pitch change is symmetric (up and down) and can often be adjusted in the synthesizer itself. The most common range value is +/- 2 semitones around the standard note pitch.

Pitch bend is often used to create glissando and guitar bend effects. To achieve this, you must send a continuous sequence of pitch bend messages, to vary the pitch in real time, often enough so that the ear does not hear too much steps in the curve.

For instance, to "bend" a note of a semitone higher, you must send a value of 0x3000, which will be sent as:

As we have seen, all NOTE ON message should have its correspondingNOTE OFF message, otherwise the note will continue to sound forever.

There are cases where you want to reset whatever notes are playing. There are basically 4 ways to do this. Some synthesizer do not accept them all, so it is interesting to offer the different possibilities.

If you send a MIDI controller 123 on one MIDI channel, the synthesizer will stop all notes playing on that channel. To reset all MIDI channels, send that message for each channel. Please note that some synthesizer do not respond to this message.

This is a one status byte message 0xFF, without data bytes. It should reset the synthesizer to its power-on default, so it also stops all notes playing. Use this message sparingly, as it reset the full synthesizer, not only the notes playing.

You can also send, for each channel (0 to 15) and each note pitch (0 to 127) one MIDI NOTE OFF message. This is the total solution, but requires a lot of MIDI messages to be sent, which may have some reaction time according to the MIDI hardware system you use.

In this case, use a table to keep track of the NOTE ON and OFF messages you send for each channel. A buffer of 128 bytes for each channel, representing the number of NOTE ON messages sent to that note,should be incremented by a NOTE ON and decremented by a NOTE OFF. Then, when you want to reset every note, simply go through that table and send a NOTE OFF to each note that is still playing.

The above information covers the basic use of MIDI for many playback situations. To find all information about the more advanced MIDI messages and conventions, you can go on the site of the MIDI Manufacturers Association, that you can easily find with Google.

If you have any question, feel free to contact me at :


Back from "MIDI Tutorial" page to "Music Software Development" page